It’s all about the picture

Sony’s 2020 X900H series delivers an appealing combination of performance and value. This level of picture quality and smart TV conveniences used to cost a lot more. As you may know, Sony builds a lot of the pro 4K cameras, lenses, and monitors used in Hollywood. I think that helps explain how the 85″ XBR-85X900H can deliver such a rich, cinema-like picture.

Power to upscale to a more natural picture

What elevates the XBR-85X900H above competing TVs is Sony’s 4K HDR Processor X1™, which analyzes the color in individual objects and adjusts the contrast accordingly. When objects are remastered individually, you get greater depth, rich texture, and a more realistic picture. Even images filmed in HD are upscaled close to 4K resolution by 4K X-Reality™ PRO.

The XBR-85X900H’s excellent native contrast is enhanced by a full-array LED backlight with local dimming. By dimming some areas of the screen and boosting others, Sony’s X-tended Dynamic Range technology produces a wider brightness range than many conventional LED-backlit TVs can deliver. And Sony’s X-Motion Clarity™ with 120Hz refresh rate clears up motion blur without dimming overall picture brightness.

Later this year, Sony will send out a firmware update that will enhance this TV’s capabilities as a gaming display, including support for advanced features like 4K/120Hz and variable refresh rate.

You can tell this TV what you want

The XBR-85X900H’s built-in Android operating system lets you easily log in to your Google ID to access a huge collection of apps, games and content from Google Play. Use the Chromecast built-in feature to stream movies, pictures, and TV shows from your iOS or Android-based phone, or from a laptop.

The included remote control lets you activate the built-in Google Assistant simply by pressing the mic button and speaking into the microphone. Use it to adjust the volume, change channels or inputs, and control other basic TV functions. Search for a particular movie or actor just by saying the name. Google Assistant can also answer everyday questions and control connected smart home devices.

Come in and save! Open 7 days a week in Tempe, AZ specializing in discounted TVs both new and refurbished. 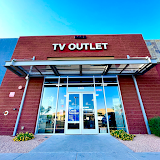 Kyle
This place is special. It’s an old fashioned sales experience with modern product selection. Greg was resourceful, helpful and engaging when I told him what type of TV I needed. Not only did we find a TV that would fit my budget, I was reassured about my purchase because of the options Greg had available. My TV was delivered with no damages to the packaging or to the screen. Greg himself set up my tv and made sure I was satisfied with my purchase before he left my residence. The next day, his highly skilled technician mounted the TV to my wall in 30 minutes. TV Outlet is professional and deserves more attention as it will out-do any big box store in the Phoenix area with its next level services. TV: 85” Samsung QLED
Read more

Luciana Taylor
Greg was very nice very Professional, Very down to earth, and very much so a people person. Not many people displayed that today. Customer service scales impeccable. Very much appreciated and welcomed. Today was my husband's birthday on a Sunday, and he made it happen. My husband's birthday present delivered on very short notice and on a Sunday couldn't ask for better.✨✨✨✨✨
Read more

Daniel Olson
Just stopped in to check out the inventory and ended up leaving with the new 65 inch LG oled. Greg was awesome and new exactly what I wanted. I ended up paying a couple hundred less than going to a big box store. Will use TV outlet for my purchases moving forward.
Read more

Joe Johnson
The TV Outlet in Tempe is not only the very best place to buy a TV but Greg is the very best in the industry at what he does. He is a very nice guy and is extremely knowledgeable about every single one of his products and goes above and beyond to help you. He is one of those type of people that once you do business with him you won't want to go elsewhere. I personally will not go anywhere else to do business but the TV Outlet. Truly one of a kind. Customer service at its finest.🔥🔥🔥
Read more

zae Brown
Soooooo let me put like this walked in wanted a Samsung q80 but this man Greg. Sold me probably the best tv on the market THE 55” LG OLED had to come back and buy the 77 a week after, too! Thank you!!!
Read more

Big Norm
AWESOME EXPERIENCE @ The TV Outlet. Greg was so helpful. He went above and beyond anything I’ve experienced from the big box stores. I got an AMAZING deal on a 75” Samsung. Definitely will be coming back and definitely recommend coming here! Thanks Greg! - Joe
Read more

Alex Ladensack
Came to Greg with a specific set of needs for a new TV for my startup business. He took my specifications and made a great recommendation for a Samsung QLED at a killer price! Very happy with my purchase and will definitely go back for all my future TV needs!
Read more