It’s all about the picture

Sony’s 2020 X900H series delivers an appealing combination of performance and value. This level of picture quality and smart TV conveniences used to cost a lot more. As you may know, Sony builds a lot of the pro 4K cameras, lenses, and monitors used in Hollywood. I think that helps explain how the 65″ XBR-65X900H can deliver such a rich, cinema-like picture.

Power to upscale to a more natural picture

What elevates the XBR-65X900H above competing TVs is Sony’s 4K HDR Processor X1™, which analyzes the color in individual objects and adjusts the contrast accordingly. When objects are remastered individually, you get greater depth, rich texture, and a more realistic picture. Even images filmed in HD are upscaled close to 4K resolution by 4K X-Reality™ PRO.

The XBR-65X900H’s excellent native contrast is enhanced by a full-array LED backlight with local dimming. By dimming some areas of the screen and boosting others, Sony’s X-tended Dynamic Range technology produces a wider brightness range than many conventional LED-backlit TVs can deliver. And Sony’s X-Motion Clarity™ with 120Hz refresh rate clears up motion blur without dimming overall picture brightness.

Later this year, Sony will send out a firmware update that will enhance this TV’s capabilities as a gaming display, including support for advanced features like 4K/120Hz and variable refresh rate.

You can tell this TV what you want

The XBR-65X900H’s built-in Android operating system lets you easily log in to your Google ID to access a huge collection of apps, games and content from Google Play. Use the Chromecast built-in feature to stream movies, pictures, and TV shows from your iOS or Android-based phone, or from a laptop.

The included remote control lets you activate the built-in Google Assistant simply by pressing the mic button and speaking into the microphone. Use it to adjust the volume, change channels or inputs, and control other basic TV functions. Search for a particular movie or actor just by saying the name. Google Assistant can also answer everyday questions and control connected smart home devices.

90-day in store warranty on all products sold. 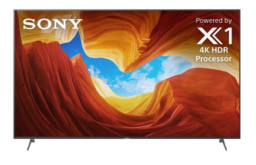